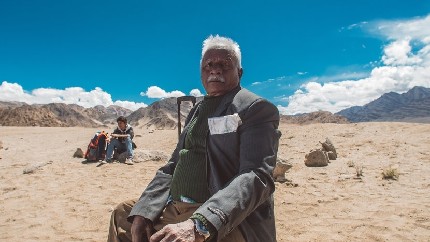 An old Mumbai man fed up with noise and chatter journeys to the Himalayas for some peace and quiet in Dar Gai’s (‘Three and a Half’) second feature.

You can feel the despair of the long-suffering hero as he submits to his wife’s nonstop chatter in the painfully hilarious first scenes of Namdev Bhau: In Search of Silence. It’s the soul-wracking, jackhammer dialogue, rather than any noisy sound mix, that motivates Namdev’s retreat from the world and his trek up a mountain to get a little peace and quiet. Written and directed by the young Kiev-born, India-based Dar Gai, the film builds slowly but inexorably to a touching surprise ending that exceeds expectations. After its initial bows in Busan, London and Mumbai, this offbeat road movie filmed on the roof of the world should continue to climb the festival path.

Though more conventionally structured than Dar Gai’s first film, Three and a Half, which was shot in three long takes of 43 minutes each, the new film shows the same sure-footed grasp of human emotions, dusted with a pinch of Indian mysticism and a good deal of humor. It has the peculiar advantage of being viewed from a foreigner’s curious perspective on Indian habits and traditions.

A 65-year-old chauffeur (wordlessly played by non-pro Namdev Gurav using his expressive face and sky blue eyes) is at the end of his rope. In his small Mumbai apartment crowded with relatives, his irreverent wife (Geetanjali Naik) talks unpleasant nonsense from morning to night, punctuated by their grown daughter’s non sequiturs. It’s not much better behind the wheel of his boss’s limo: his businessman employer is always jabbering on the phone or criticizing Namdev for not making conversation. The skillfully exasperating dialogue in these opening scenes captures the audience’s attention and paves the way to the nonverbal world Namdev goes to seek up north, one long bus ride away.

Armed with only a small trolley and a newspaper article on “The World’s Top 5 Silent Places,” he heads for Silent Valley in the high Himalayas. During his first night in a mountain chalet, the howling wind and a howling wolf disturb the quiet night, but they’re nothing compared to the pretty chatterbox (Zoya Hussain) who barges into his room and, announcing she’s scared of ghosts, insists on sleeping on the floor. He leaves her behind the next morning with an evident sense of relief.

The pace slows in the midsection of the film, sometimes dragging as it follows Namdev’s progress through pristine forests, over mountain ranges and down nature paths. He has brief, unwelcome encounters with people he meets on his way, and every time he thinks he has finally found paradise, he is rudely disillusioned. Even when he sleeps alone on a hillside under the stars, the crickets bother him.

At a lonely bus stop, a young boy traveling alone takes an interest in him. At first, he seems like just another pest. Despite the old man’s clear signals that he doesn’t desire company, the boy Aaliq (newcomer Aarya Dave) perversely starts following him across breathtaking deserted landscapes, babbling on repetitively and provoking him to respond. It turns out that Aaliq, who is on his way to a rendezvous with his parents at a place called the Red Castle, is on a sort of treasure hunt and one of the tasks he has to tick off is traveling under the protection of an elderly gentleman. His torture of Namdev is all part of an elaborate game. What Namdev fails to realize is that it is also a test for him and his ingrained misanthropy.

At their height, Aaliq’s unbearable pestering and Namdev’s steadfast refusal to speak approach a grotesquely funny Chaplin or Jacques Tati routine, and one wonders how it will all end. Gai’s screenplay cleverly keeps everything on the surface level of absurdity until a final revelation scene brings an unforeseeable twist. The ending of the film comes out of the blue, so moving and right that it makes you pardon some of the tedium that has gone before.

Aditya Varma’s simple, essential cinematography and shooting style make use of natural light and a lot of fixed framing. A gentle score by Italian composer Andrea Guerra smooths over shots that would normally be covered by local ethnic sounds.