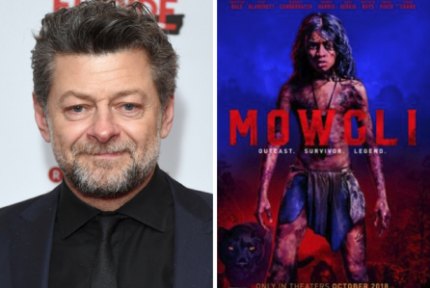 EXCLUSIVE: Welcome to the jungle that is this fast-shifting movie meld between theatrical release and streaming. In the biggest acquisition of a finished film it has made so far, Netflix has acquired from Warner Bros the worldwide rights to Mowgli, the CGI live action film directed by Andy Serkis based on the Jungle Book stories of Rudyard Kipling. Instead of an October 19 theatrical release by Warner Bros, the film will be released globally on Netflix next year, with a theatrical component built in so that audiences can see the 3D version that Serkis has been working so hard on.

The film has a cast that includes Christian Bale as the cunning panther Bagheera, Cate Blanchett as the sinister snake Kaa, Benedict Cumberbatch as the deadly tiger Shere Khan, Moonlight‘s Naomie Harris as the female wolf Nisha, and Serkis as the wise bear Baloo. Surrounding them in live action roles are The Americans‘ Matthew Rhys, Freida Pinto and Rohan Chand, who after appearing in the films The Hundred-Foot Journey and Bad Words, plays Mowgli, the boy raised by wolves.

In buying worldwide rights from Warner Bros, Netflix gets a first-rate studio-caliber film made by Serkis, who has turned in groundbreaking performance capture and CGI work in films like The Lord of The Rings as Gollum, King Kong, and The Planet Of The Apes films. Serkis and Warner Bros get out from under the inevitable stigma that would have haunted a full scale theatrical release of a film that would inevitably be compared to Disney’s The Jungle Book, which grossed $966 million worldwide. At one point, there was a race between that film and Mowgli — both based on Kipling’s public domain work — but it is never good to be runner up, especially when the other one became such a big hit.

Serkis made Mowgli with 3D effects he hopes can be displayed in a theatrical component that will be part of Netflix’s release plans. But here, he will get an enormous global audience and see through his vision for a story that is darker and more dangerous than the one Jon Favreau directed for Disney.

“When I came on the project, the script commissioned by Warner Bros was very close to the tone of the Kipling book,” Serkis told Deadline. “It was very focused on Mowgli, this outsider, this outcast. The metaphor for the whole movie is other-ness, a search for self-identity. In the book, he is this feral child raised in the strong traditions of the wolf pack, and when he gets to the point in life where he realizes they are not his family it’s a cataclysmic moment for him. He tries to assimilate in the world of men, for his own safety. He finds there are customs that are good and bad, just like in the other kingdom, and he sets out on a journey of self-discovery to create his own morality. There is real jeopardy and consequence here, with an emotional resonance meant to be for a slightly older audience than most of the Jungle Book films we’ve seen. That was reflected in the script and how it was cast, and the whole way we approached the design of the animals. The human being and the animals are emotionally truthful, and not in any way were we tipping the wink to the audience that this is a fairy tale.”

“Then, of course, we found ourselves in this race with Disney and there was a when we were neck and neck, in who would come first,” Serkis said. “Both studios wanted to be first. But we realized that the performance capture techniques required time in how I wanted to work in post, and we decided to let the other film have its moment. By that point, we’d shot the whole thing, and we did a series of pickup shots that we wanted to have in time for post production.”

Once the ticking clock stopped and they stopped worrying about beating their rival, Serkis and his film making team took their time to focus on the strengths of their film. They sought guidance from outsiders, like when Oscar winning Gravity director Alfonso Cuaron spent a couple weeks dispensing wisdom, while Serkis was off shooting War for the Planet of the Apes. “We took our time with the performance capture, allowing the animators to make the most of the great performances by Blanchett, Cumberbatch and Christian Bale, to bring them to life in the most extraordinary way we could,” Serkis said.

The movie was shot in South Africa and made to reflect the jungles of India and its civilization during the 19th Century.

“I wanted to make it of its time and reflect Kipling’s own journey,” Serkis told Deadline. “His first language was [Hindi], and he was brought up in India, and then came to live in England. There, he suffered brutality and bullying because he was an outsider, and I think that sense of otherness came through in his Jungle Book stories and the character of Mowgli. Kipling’s work has been interpreted in a lot of different ways, and his writing since his glory days back then has been somewhat vilified for his depiction of globalism. There is a racist element to many of his stories and poems. You cannot ignore, though, that he wrote and reflected the political situation at the time, and in a mild way, the film examines emotions of class and colonialization of India.” Class comparison metaphors are there in contrasting the relationship between the British, the villagers, and the animals of the jungle.

“All these themes are attached to a live action movie that has the real feel of being shot on location of real jungle sets in South Africa,” Serkis said. The complex vision he describes was borne out in the first trailer:

With a mythology as dense as the jungle, Serkis was glad Netflix stepped up. He likened Mowgli to Okja, director Bong Joon-ho’s fable about consumerism that became one of the buzziest films of the 2017 Cannes film festival. It was an auteur turn that began as a fable between a pic genetically bred to be oversized, and the young girl who cared for him. Later, it took a the-pawn-shop-scene-in-Pulp-Fiction turn that would have made it difficult to market theatrically. But was still a wild director-driven ride.

“I’m really excited about Netflix for Mowgli,” Serkis said. “Now, we avoid comparisons to the other movie and it’s a relief not to have the pressure. I’ve seen the 3D version, and it’s exceptional, a different view from the 2D version, really lush and with great depth, and there will be some kind of theatrical component for that. What excites me most is the forward thinking at Netflix in how to present this, and the message of the movie. They understand this is a darker telling that doesn’t fit it into a four quadrant slot. It’s really not meant for young kids, though I think it’s possible that 10 or above can watch it. It was always meant to be PG-13, and this allows us to go deeper, with darker themes, to be scary and frightening in moments. The violence between animals is not gratuitous, but it’s definitely there. This way of going allows us to get the film out without compromise.

“I think this is their largest acquisition, it’s a big movie,” Serkis said. “But I never looked at it as a big blockbuster movie. It’s hard to quantify. It has the scale of a blockbuster, but it’s somewhere between Life of Pi and an Apes movie. It has that reality to it, same as Okja had. We are talking about 2019 and circling dates. Netflix has allowed the film making that I wanted to do, to exist and they’ve created an atmosphere for me kind of storytelling I set out to do. “

This takes to a new level the deals that Netflix has been making with movie companies looking to lay off risk on their projects. That included buying rights to Paramount’s Cloverfield sequel God Particle, advertising it as a surprise on the Super Bowl and launching it right after the game, to acquiring the foreign rights to New Line’s new Shaft movie from Warner Bros and New Line, which will play on Netflix’s offshore service two weeks after the domestic theatrical release, and offshore rights on the Alex Garland-directed Natalie Portman-starrer Annihilation from Paramount, which began running 17 days after its domestic theatrical launch. It is eyed as a new model for films that have a hard time gaining traction overseas, but the Mowgli deal is much different in scope and scale.