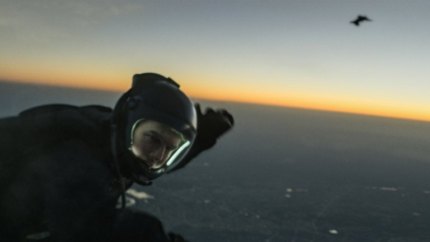 In 2011, for Mission: Impossible – Ghost Protocol, Tom Cruise famously flung himself from an open window about two thirds up Dubai’s Burj Khalifa – aka the world’s tallest tower at some 2,716 feet – serving up one of the franchise’s most heart-stopping stunts.

Seven years on and he’s arguably topped this in Mission: Impossible – Fallout, becoming the first actor to perform a HALO (High Altitude, Low Opening) parachute jump, a fall of some 25,000 feet with speeds hitting 200 mph (and one that requires an oxygen mask). Cruise himself has described it as one of his “most dangerous stunts yet.”

While the plot involves Cruise (as Ethan Hunt) descending dramatically into Paris, the shoot actually saw the actor and production return to the United Arab Emirates in the Middle East, this time in Abu Dhabi just up the road from Dubai (the French countryside was added in post-production). And it was a stunt that required the intense cooperation of the UAE military, alongside two planes and more than 100 jumps out over the desert.

“Paramount were looking specifically for a C-17 aircraft, which is not available in many parts of the world,” says Maryan Eid AlMheiri, CEO of twofour54, the Abu Dhabi media zone authority that worked alongside the Abu Dhabi Film Commission, the armed forces and the film producers on the logistics of the stunt.

The UAE military, as it happens, has a number of C-17s (full name: Boeing C-17 Globemaster III), the vast transport planes often used to airlift troops or cargo, with six reportedly currently in operation. And it was this availability that AlMheiri says was one of the main factors in attracting Fallout.

But it wasn’t just an aircraft – alongside the personnel and pilots – that the UAE armed forces provided, with production also given a hangar at the military base from which to run their operations, alongside a number of other essential elements.

“They gave us access to decompression chambers, which were needed and on high alert while we were jumping, and also had a medevac team on standby every day during rehearsals, training and the actual jumps,” says Mariam Abdallah, a twofour54 production manager. “There was also a trauma doctor, plus the Civil Defense on standby.”

Although producers had requested just one C-17 for practicing, rehearsals and the actual shoot itself, health and safety requirements meant that the UAE military had to provide another aircraft, a DHC-6 Twin Otter. This plane, however, could only go as high as 18,000 feet.

As such, in the weeks leading up to the shoot in February and March, the Fallout team practiced by alternating between both planes. In all, 110 jumps were performed, with Cruise himself doing 94.

The initial plan was to shoot over three days, but the production soon found that to capture the right light during sunset, just as a warm glow emerges over the horizon, there was only one opportunity every 24 hours.

“Every day we’d ask, ‘Do we extend?’ And each time it was, ‘Ok, we’ll plan again for tomorrow’,” says Abdallah. “That was probably the most challenging aspect of it all.”

Eventually, the entire HALO jump took 12 days to film, with the C-17 aircraft used for the first two sections of the sequence and the Twin Otter for the third. It has since featured front and center of Mission: Impossible – Fallout’s marketing, appearing in the trailers and as the main focus of a special featurette that was screened at CineEurope in June.

As for Abu Dhabi, films such as Star Wars: The Force Awakens and Furious 7 – both of which shot extensively in the Emirate – have given it ample opportunity to shout about its growing status as a location for major Hollywood blockbusters.

But with any clues as to Mission: Impossible – Fallout’s Middle East credentials having been all but erased from the film’s final cut, Abu Dhabi may this time simply have to contend with providing the necessary resources – and airspace – for one of this year’s most audacious Hollywood stunts.