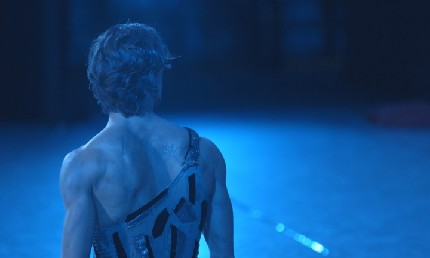 Sergei Polunin has a reputation as “the bad boy of ballet.” There might not be much competition for this title, but the Ukrainian-born dancer wears his badge of dishonour just as proudly as he displays his eight tattoos. One visible tattoo is too many by conventional standards in the ballet world, so this bad boy and young prodigy topples the establishment with a defiant, yet elegant kick.

On the heels of the Benjamin Millepied doc Reset comes Dancer, another profile of a famous ballet star who goes against the grain, but both the subjects and the docs are of very different varieties. While Reset observes the complete production of a ballet to highlight Millepied’s refreshing take on the art, Dancer offers an intimate profile of its young star that tackles the dedication and commitment it takes to become the Lord of the Dance. Director Steven Cantor employs an impressive range of archival videos and home movies to show Polunin’s evolution as both an artist and a rebel, while interviews with the Ukrainian dancer, his parents, and his friends illuminate the drive and sacrifices behind the ballet and bad behaviour alike.

One doesn’t expect a conventional look at ballet when a film begins with the dancer getting high on secret army painkillers before taking the stage. Knocking back most of the bottle, but keeping a little bit on reserve for a second wind, Polunin admits that he often fails to remember a performance once the night is done. The star doesn’t shy away from hiding his substance abuse—if anything, he’s rather braggadocio about it—and the doc reveals that addiction and personal demons aren’t unique to Hollywood or rock and roll. They can find their way into any life with high demands on personal time and equally soaring pressure to succeed. One interviewee even calls the life of a principal dancer one of abstinence, if that gives any indication of how rebellious Polunin’s behaviour may be.

The pressure is high as Polunin’s parents explain in new interviews how they made sacrifices for their son. Among the tough decisions they reveal include the choice to leave the boy in London when he was accepted at the Royal Ballet School and his mother, Galina, couldn’t get a visa to stay with him. Living in London illegally would have jeopardised the boy’s future, his mother explains in the doc, and she adds that compromising their relationship for his career was a hard but necessary choice. The strain in this family relationship is evident in all the interviews with Polunin and his parents that reference their connections.

So much pressure inevitably leads one to snap, though, and Polunin abruptly exits the spotlight just when his success and notoriety are at their peaks. Dancer shows Polunin return home and try to rekindle the artist he felt had died on the London stage, but his days following the spotlight aren’t especially glamorous. Excerpts from reality TV display the prime dancer slumming it on Russia’s equivalent to dance competitions such as Dancing with the Stars and So You Think You Can Dance?, which are hardly the challenges to fuel an artist’s passion.

The flame reignites, though, when Polunin collaborates with American photographer David Lachapelle beginning in 2014. This work includes a sumptuous dance video in which Polunin displays his full range of talent in a gorgeously shot interpretation of Hozier’s Take Me to Church. Dancer lets the video play at length and the extended scene is the best realisation of Polunin’s talent and passion. It’s easy to see why the video became a viral sensation and, more importantly, proved the dancer’s salvation and resurrected his love for dance. The sequence offers an incredible high.

Dancer energetically takes audiences through the highs and lows of life in the spotlight. When Dancer shows its subject extend his limbs to their full reach, it’s a film that soars.