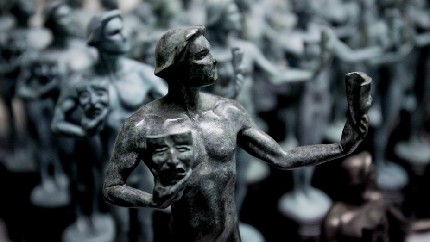 The union accused the Academy of “self-serving intimidation” ahead of its Jan. 27 ceremony.

A fight has broken out between SAG-AFTRA and the Academy of Motion Picture Arts and Sciences, with the actor’s union charging that the Academy is exerting “extraordinary and unwarranted pressure” to keep actors, who it is trying to book for appearances on the Oscars, from appearing as presenters on the upcoming SAG Awards.

“We have received multiple reports of these activities and have experienced firsthand the Academy’s graceless pressure tactics and attempts to control the awards show talent pipeline. Awards season is a very special time when actors and actresses are being appropriately celebrated and recognized for the outstanding quality of their work. We would expect the Academy to honor these goals,” SAG-AFTRA said in a statement issued today

The union, who will host its SAG Awards on Jan. 27 at the Shrine Auditorium in Los Angeles, continued, “This self-serving intimidation of SAG-AFTRA members is meant to limit their opportunities to be seen and honor the work of their fellow artists throughout the season. Actors should be free to accept any offer to participate in industry celebrations. The apparent attempt by the Academy to keep our members from presenting on their own awards show is utterly outrageous and unacceptable. The SAG Awards supports their union’s operations and important charitable assistance programs that provide valuable support to performers.”

It concluded, “We call on the Academy to cease this inappropriate action.”

A similar skirmish, as The Hollywood Reporter reported, already took place between the producers of the Golden Globe Awards and the Academy, who was accused of interfering with the recruitment of presenters.

People close to the production of the Golden Globes are furious that the Academy of Motion Picture Arts and Sciences interfered with their recruitment of presenters at the Hollywood Foreign Press Assn.’s Jan. 6 ceremonies.

“They’ve done it for years,” one source says, “but we used to be able to have Dick Clark Productions or NBC smooth things over” so that talent could appear on both telecasts.

The Globes team — which had been trying to book presenters from August through the holidays — was told by reps that the Academy notified them that if clients presented at the Globes, they would not be asked to appear on the Oscars. Margot Robbie is among those said to have chosen the Oscars over the Globes.

The Academy did not immediately respond to a request for comment.