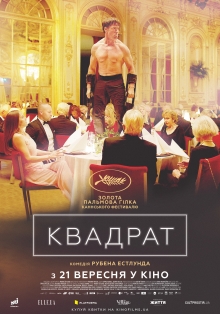 After its Palme d’Or, The Square is put forward by Sweden for the Oscar

Ruben Östlund hopes that he will not miss out on a nomination for the Best Foreign-language Film Academy Award this time around.

Swedish director Ruben Östlund’s fifth feature, The Square, which won the Palme d’Or at this year’s Cannes International Film Festival, will be Sweden’s submission for the Oscar nomination for Best Foreign-language Film.

“I had a terrible experience last time,” recalled Östlund. “I really hope it will be less painful this time.”

Produced by Erik Hemmendorff, of Sweden’s Plattform Produktion, and Philippe Bober, of France’s Coproduction Office, it was also scripted by Östlund and is described as “a poignant, satirical drama reflecting our times, about the sense of community, moral courage and the affluent person’s need for egocentricity in an increasingly uncertain world”. It is set in a modern art museum (and inspired by an installation of the same name that Östlund himself made for his first exhibition). A few days before the opening of a prestigious exhibition, its successful curator is mugged, which he will neither shake off nor let pass unnoticed: he embarks on a hunt for the perpetrator. He has hired a PR agency to promote the upcoming event, which takes an unexpected turn and plunges both him and the museum into a crisis – while at the same time his hunt for his assailant leads him to end up in situations that turn steadily more amusing and make him question his own moral compass.

With a cast including Claes Bang, Elisabeth Moss, Dominic West, Christopher Læssø, Marina Schiptjenko and Annica Liljeblad, the film was released domestically today (25 August) by TriArt; France will follow on 18 October (courtesy of Bac Films), Germany on 19 October (Alamode), the USA on 27 October (Magnolia Pictures) and the UK in early 2018.