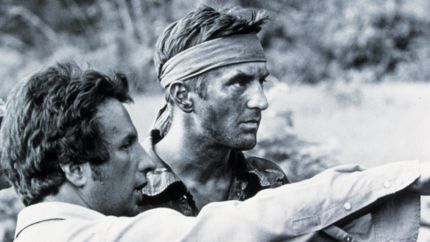 Among the considerable achievements of Michael Cimino’s “The Deer Hunter” is the fact that the film remains intense, powerful and fascinating for more than three hours. Three hours, however, is a long time for the average filmgoer (or theatre) and the running time of the Universal-EMI coproduction is just one of the handicaps this ambitious and demanding work will have to overcome.

Another hurdle is its theme–the impact of the Vietnam experience on this country–and that’s a topic other pictures have tackled during the last 12 months, although none with more than modest success. If Universal can create an “event” out of “The Deer Hunter,” subsequent word of mouth could make it the Vietnam b.o. exception.

The picture is a long, sprawling epic-type in many ways more novel than motion picture. It employs literary references stylistically, forecasting events which will happen in the film. Events are foreshadowed by the way the camera moves and by epigrammatic hints made by characters–techniques more frequently related to book writing. Cimino’s film is worthy of serious study and certainly will be treated to much analysis during the next year, and decade as well.

It is a brutal work. Robert De Niro, John Cazale, John Savage and Christopher Walken head cast as friends living in a small Pennsylvania town. They attend a Russian Orthodox wedding at the beginning of the film. Directly afterwards three of them go deer hunting and soon afterwards they are to serve in Vietnam.

The film’s opening hour chronicles the wedding and while what happens at the wedding is interesting–exploration of the customs and rituals attendant with the affair–Cimino might have better spent the time detailing the protagonists outside of this single event. It would have further fleshed out their individual personalities.

While in Southeast Asia, the trio is reunited during a battle scene and later captured by the Vietcong. As POWs they are forced to play a form of Russian roulette. A revolver with one bullet is passed back and forth between two prisoners. Spectators bet on which of the prisoners will blow his brains out.

This game, apparently, was played in Saigon and other parts of Southeast Asia as well. It was a parlor sport of some sort. The contest is shown a number of times and the filmmakers spare the audience none of the bloody consequences.

Throughout the film various ceremonies and cultural rituals are explored, compared and juxtaposed – the wedding, the game and the deer hunt. It is up to the viewer to decide how these rituals fit together and it is a big comprehension demand.

On a more superficial level the picture looks at the impact of the war on a small town. Two of the town’s boys return home, one in a wheel chair and the other (De Niro) as a disturbed hero. Walken remains behind.

The action, throughout, is outstanding. Walken’s performance is a marvel and it should at last give him the widespread recognition he deserves. Technical credits, Vilmos Zsigmond’s cinematography, the art direction by Ron Hobbs and Kim Swados and Peter Zinner’s editing are also first rate.

Many will wish that the screenplay by Deric Washburn were a bit more straightforward. It may be too literally “dense” for a wide audience.

Still, the film is ambitious and it succeeds on a number of levels and it proves that Cimino is an important director who deserves to be watched carefully.