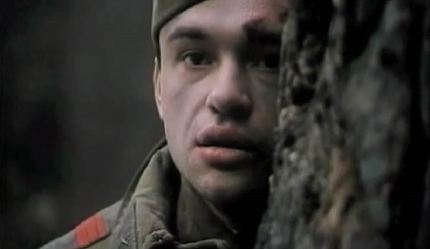 In September 1992, at the Venice International Film Festival, “Oxygen Starvation” was presented with the Italian Film Critics’ Association Special Award. Recognizing the artistic value of the film, the festival organizers scheduled additional screenings in Rome, Milan and other Italian cities. Following this success the film’s top star, Taras Denysenko, won the Best Actor Award at the film festival in Thessaloniki, Greece, in November 1992.

The film also won critical acclaim at Toronto’s Festival of Festivals and the Manheim International Film Festival, where it was nominated for the main prize. At all of these festivals, “Oxygen Starvation” was the only film representing Ukraine and Ukrainian cinema.

The Ukrainian-Canadian co-production tells the story of a young Ukrainian recruit, Roman Bilyk, who undergoes obligatory military training, as did a whole generation of young Ukrainians forced to serve in the Soviet Army. In witnessing the experiences of the protagonist, viewers have an opportunity to see the Soviet military as it really was and to understand how a soldier becomes a product of the totalitarian system.

The film was shot in 1991 on location at actual military installations, amid the ruins of nuclear missile launchers, and in military zones kept secret until recently.

Viewers witness the deplorable conditions in the camp, torturous training methods and propagandistic brainwashing, as well as the physical and moral terror inflicted on young recruits by older soldiers.

“Oxygen Starvation” portrays the progressive demoralization of the protagonist, who is forced to abandon his scruples and to conform to the harsh reality of his surroundings. The prestigious American magazine Variety described “Oxygen Starvation” as “well made and uncompromising in its depiction of the dismal [Soviet] camp.”

The film is the full-length debut of a young, previously unknown, Ukrainian director, Andriy Donchyk. It was produced (in collaboration with the Kobza Joint Venture and Victory FF from Ukraine) by Toronto’s Kobza International Corp., co-producer of the critically acclaimed film “Swan Lake. The Zone,” winner of the International Critics’ Prize for Best Film at the Cannes Film Festival in 1990.

The premiere of “Oxygen Starvation” took place in Kyyiv, in November 1992. The film is due for North American release in Toronto in February. Afterwards, the film will be shown in other cities and film festivals, including Hong Kong and Singapore.