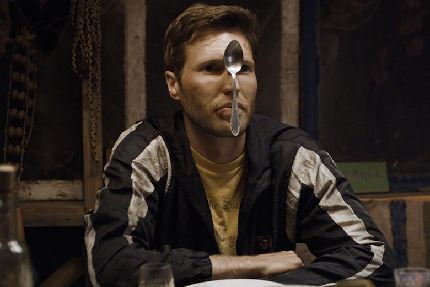 A translator finds himself abandoned in a strange Ukranian town.

Midway through Volcano, a local ducker and diver on the south Ukrainian steppe points in the direction of Kiev and tells the newcomer in town: “War was there. Here is total anarchy.” This fabulous line captures the essence of Roman Bondarchuk’s auspicious first feature, which draws on his documentary background (notably 2015’s Ukrainian Sheriffs) to portray a community that ought to be fictional, but rings all too true.

The deadpan comedy concerns an OSCE translator, lost and presumed dead by his organisation, who stumbles upon a lawless backwater town and finds it impossible to leave – for existential as well as practical reasons. With the region’s current strife bubbling in the background, the film is alternately comic, violent, romantic and surreal, with moments of beautiful artistry – an enticing package that ought to secure a festival run and specialised programming. It feels like a significant step in a promising career.

Lukas (Serhiy Stepansky) is a thirty-something translator for the international security agency, driving a team to an inspection of Crimea border checkpoints. In the middle of nowhere the car breaks down and he goes to find help; when he returns, with the keys still in his pocket, the car has disappeared.

The stoic Lukas hitches a ride to the town, where he’s casually taken in by Vova (Viktor Zhdanov), who lives in an ungainly lump of a house on the edge of a reservoir with his cantankerous mother and friendly daughter Marushka (Khrystyna Deilyk). Vova is a gregarious loser whose big dream is to excavate the bones of German WWII soldiers and sell them to the families in Germany. But there’s more to him than meets the eye, and he will become both guide and protector to the younger man.

On the surface, the town is a terrifying place where gangs carry assault rifles, many locals are without ID and no-one has a conventional job. Lukas’s initial attempts to return to civilisation are deterred by a series of setbacks: his possessions, including his passport, are stolen at a house party; when he reports the theft, the police put him in jail; after being bailed by Vova, he is beaten half to death by a gang and left in a hole to die.

Ukrainian Sheriffs was located in an isolated farming settlement, also in southern Ukraine, as nearby Crimea became part of Russia. Volcano is contemporary, with much of the discord south and east still in play. “Now what’s he blabbing about?” riles Vova’s mother, as Putin speaks on TV, calling the Russian president an “ignoramus.”

But the sense is that this place was forgotten long before. Vova talks about his fish farm, whose assets were stripped by the government, and of the village that now lies beneath the reservoir, its former choir appearing on land as a mirage. These echoes of the past explain the more appealing, albeit distinctly eccentric community that, alongside Marushka, slowly seduces the newcomer.

Here and there Bondarchuk and his cinematographer Vadim Ilkov compose an image that is as strikingly beautiful as its underlying message is not: an extended, overhead shot of a rust red barge entering a dam – the ethereal singing that accompanies it later revealed as that of the dead choir beneath the water; Lucas’s potential early grave is dug into an ashen field of former sunflowers.

But for the most part the shooting, in the town of Beryslav, has a no-nonsense verité feel to it, with the tone underpinned by the use of a number of local non-actors in front of the camera. Equally smart is the casting of Stepansky, an experienced sound designer in his first acting role, whose minimalist reactions to his environment leave the audience to make its own responses and, like Lukas, derive some faint sense of optimism from the chaos.