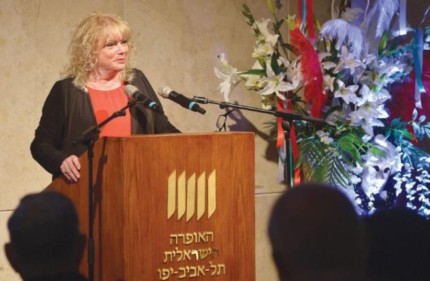 “I’m leaving a superb and dedicated organization with programs slated until 2020,” says Munitz.

After 31 years on the job, 21 of them as general director, Hanna Munitz will retire from the Israel Opera (IO) at the end of the current season.

“The opera was given to me in trust,” she said at yesterday’s press conference announcing the 2016/17 season, “and now I have to give it back. Over the years I’ve had happiness, fulfillment, frustrations, even sorrows, but that’s life, no? I’m leaving a superb and dedicated organization with programs slated until 2020.”

Her replacement, chosen from among some 160 applicants, will be named in a month or so, and Munitz told the media “I hope you will support him or her as you’ve supported me.”

Under her stewardship, the IO has grown into an internationally respected institution with a large national and international following. The many programs Munitz has initiated include the Opera Festival at Masada, community opera at towns and villages all over the country and the Opera Studio for the training of young singers.

The annual budget, not counting the productions at Masada, runs to some NIS 100 million of which only 28 percent comes from public funding.

The remainder is covered by donations and ticket sales.

Responding to the rumor that has Culture and Sports Minister Miri Regev threatening to trim the IO’s budget, Munitz only said “I cannot suppose that anybody really wants to harm a well-run and successful organization.”