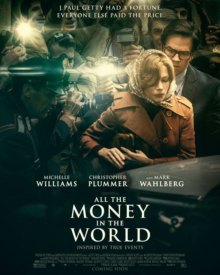 Wahlberg and WME are making the donation in the name of Michelle Williams, the co-star paid 1 percent of what Wahlberg was on ‘All the Money in the World’ reshoots (власне, навіть менше 0,1%. – БУК).

Bowing to an outcry over the wage disparity on the reshoots of All the Money in the World, Mark Wahlberg and his agency William Morris Endeavor have agreed to donate $2 million to the Time’s Up fund to combat harassment and pay inequities in Hollywood.

“Over the last few days my reshoot fee for All the Money in the World has become an important topic of conversation,” Wahlberg said in a statement. “I 100 percent support the fight for fair pay and I’m donating the $1.5 million to the Time’s Up Legal Defense Fund in Michelle Williams’ name.”

“The current conversation is a reminder that those of us in a position of influence have a responsibility to challenge inequities, including the gender wage gap,” WME said. “In recognition of the pay discrepancy on the All the Money in the World reshoots, WME is donating an additional $500,000 to the Time’s Up Legal Defense Fund in Michelle Williams’ name, following our $1 million pledge to the organization earlier this month. It’s crucial that this conversation continues within our community and we are committed to being part of the solution.”

In the wake of a USA Today report that while Wahlberg received an additional $1.5 million beyond his original salary, his costar Williams was given nothing but a per diem of about $1000. The dramatic difference in how the two stars were compensated triggered an outcry.

Coming at a moment when, under the new Time’s Up banner, actresses are calling for gender equality, the report appeared to present an extreme case of a male actor being lavishly rewarded while his female co-star was expected to work for less than one percent of his salary.

Jessica Chastain, who has emerged as a leading activist for the cause of women’s equality and who was among the first to publicize the disparity, tweeted, “Please go see Michelle’s performance in All the Money in the World. She’s a brilliant Oscar-nominated, Golden Globe-winning actress. She has been in the industry for 20 years. She deserves more than 1% of her male costar’s salary.”

Amber Tamblyn quickly responded via Twitter, “Michelle Williams was paid 1% of what her male co-star made on her latest film. This is totally unacceptable.”

Judd Apatow added in a tweet of his own, “This is so messed up that it is almost hard to believe. Almost. This is how this business works. I wonder if the studio or Wahlberg will do something to make the situation less insane,” while actress Sophia Bush tweeted, “Exposing the gross disparity in pay & hard evidence of the gender gap — negotiated by the SAME agents no less! — isn’t a witch hunt. It’s a demand for fair practices.”

Both performers are represented by William Morris Endeavor — although each is repped by separate agents there — which only fueled the perception of injustice and put WME in the crosshairs.

When director Ridley Scott made the unprecedented decision to reshoot, in the wake of the allegations of sexual assault leveled against Kevin Spacey in November, he and his team had to move quickly since the film’s scheduled release was just one month away. While the director needed both Williams, who plays Gail Harris, the mother of kidnap victim John Paul Getty III, and Wahlberg, who plays a former CIA operative who becomes involved in the attempts to secure the boy’s release, Williams apparently agreed to return without making any additional salary request, while Wahlberg demanded further compensation.

Imperative Entertainment, which financed the film, put up an additional $10 million for the reshoot. Sony, which is distributing the film in the U.S., was not involved in the negotiations to bring back the cast and crew for the added reshoots.

Wahlberg had earlier agreed to take about 80 percent of his usual quote — which is in the $15 million range — to appear in the film. In Hollywood’s particular calculus, while Williams has an impressive resume (having earned four Oscar nominations, most recently as supporting actress in 2016’s Manchester by the Sea), Wahlberg is considered the bigger box-office draw, since he has starred in worldwide blockbusters like 2014’s Transformers: Age of Extinction. During the course of his career, Wahlberg has appeared in 11 films that have grossed more than $100 million at the domestic box office, while Williams, who has generally gravitated to more dramatic, less commercial fare, has appeared in just two films that have hit that mark.

Those who argued Wahlberg’s case contended that not only did he take a larger pay cut to do the film in the first place, but when the question of reshoots arose, the actor had more leverage since his name also had been used to secure foreign sales on the film and he also was beginning to shoot a new film, Mile 22.  According to a further report in USA Today, Wahlberg also had co-star approval and would not approve Plummer’s casting until his salary demand was met.

Possibly further complicating the issue is the question of whether the film’s principal stars had agreed to make themselves available for necessary reshoots in their original contracts, as is often customary. One source insists that unlike his co-stars, Wahlberg was not contractually obligated to do reshoots, while other reports have said that all the actors in the film had contracts that provided for reshoots.

It’s also unclear whether or not Williams knew that Wahlberg hadn’t yet committed to the reshoots when she agreed to participate. She may have been presented with a scenario in which she was told her participation was critical to rescuing the project.

At the time, Scott also said that while Plummer was paid to join the project, Wahlberg and Williams weren’t paid for the extra days they contributed and that he’d also not taken the added salary.

At the moment, neither the principals in the drama nor WME are commenting, and their various reps either declined or did not respond to requests for further comment.

Since opening Dec. 22, All the Money in the World hasn’t caught fire at the box office, where it has grossed just $20 million, with most of its international rollout still to come.