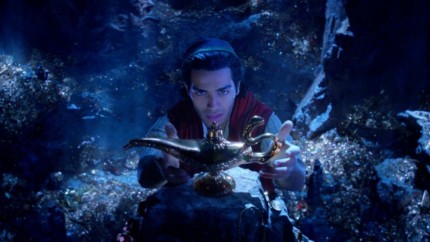 The live-action pic grants star Will Smith and director Guy Ritchie access to the billion-dollar club for the first time.

Talk about a magic carpet ride.

Disney’s live-action Aladdin has crossed the $1 billion mark at the global box office, a feat accomplished after audiences disregarded lukewarm reviews. The music-infused family film is an update of the classic 1992 animated film.

Aladdin also gives star Will Smith and director Guy Ritchie entry to the billion-dollar club for the first time, not adjusted for inflation.

The summer tentpole crossed $1 billion today after finishing Thursday with a North American total of $343.1 million and $656.2 million overseas for a global haul of $999.3 million.

The music-infused family film, an update of the classic 1992 animated pic, first hit theaters over Memorial Day. It’s the third Disney release of the year to join the club after Avengers: Endgame and Captain Marvel, and the fifth Disney live-action movie to do after Beauty and the Beast, Alice in Wonderland and two of the Pirates of Caribbean installments.

Aladdin has enjoyed remarkable staying power. It stayed in the top seven for nine weeks in North America. Overseas, it has dazzled in Japan, earning nearly $100 million to date. In South Korea, it is the No. 4 Western title of all time with $81 million, while it is the highest-grossing movie of all time in the Middle East region.

Aladdin is the 41st movie to cross $1 billion, and did so just one day after Sony and Marvel Studios’ Spider-Man: Far From Home achieved the same milestone.