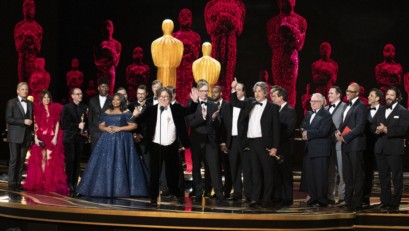 How did Green Book win? I have to assume the preferential balloting [which in a close race can elevate films ranked second or lower by many voters] helped because people clearly had a lot of regard for Roma, based on Alfonso Cuarón’s directing win. Regardless, many Academy members, sad to say, aren’t very rigorous and don’t hold their choices to a high standard; the award is for excellence and artistry, not whether a movie made you feel good. Green Book is a fine enough film, but it’s not an Oscar film — period — and I’m very disappointed that so many members thought it is.

What’s rather remarkable is that the Green Book “controversies” seemed to disappear — and, for many members, never even existed. Not all Academy members are active on Twitter, but those who are don’t like being vilified all the time [for the Oscars not being sufficiently woke]. There’s a fatigue of opening up your computer and seeing outrage every day.

I know people who voted for Green Book for best picture and [BlacKkKlansman’s] Spike Lee for best director. People are not very self-aware; they live in a world of constant contra­diction. If you’re a schmo making $30,000 a year, why would you vote for Donald Trump? But many obviously did. The same kind of [contradictory impulses] happen in Hollywood.

I absolutely do not think there was a Netflix backlash — look at how many awards it did win [three]. There were certainly some members who had an issue with it, but most people recognize that this is just the way it is now. The bottom line: A foreign-language film in the best picture category always faces an uphill battle, no matter who made it or released it or how much money they spent campaigning for it. The fact that Roma got as far as it did is very impressive.

As for [best actress frontrunner] Glenn Close, I don’t know what the hell happened. Her movie [The Wife] had a lot lower profile than Olivia Colman’s. That may have just been the category where people wanted to give The Favourite something — plus, Olivia is fully deserving, and that’s just the way the cookie crumbled. Keep in mind, the 2,500 newer members are mostly younger and may not really appreciate Glenn as much as those of us who have been around. You can’t look at the Academy as one big homogeneous blob.